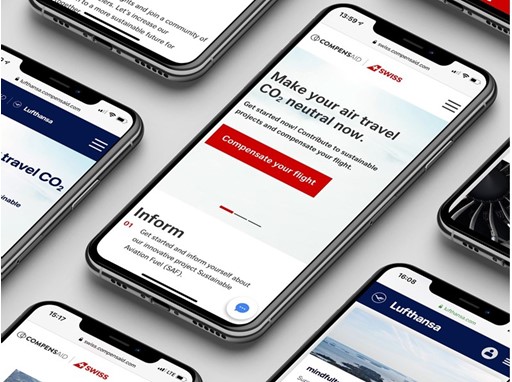 SWISS is expanding its customers’ carbon offset options for their air travel activities by integrating the Lufthansa Innovation Hub’s “Compensaid” platform into its reservations portal. As a result, SWISS travellers can now reduce their carbon emissions by purchasing sustainable alternative fuel. They can also continue to offset their emissions by contributing to long-term SWISS partner myclimate, which invests in climate protection projects. Compensaid thus gives customers a choice of approaches (which can also be combined) for reducing the environmental impact of their air travel in carbon emissions terms.
Following a successful trial phase, the “Compensaid” platform developed by the Lufthansa Innovation Hub is to become SWISS and Lufthansa’s prime carbon offsetting option. SWISS customers will now find Compensaid directly in the SWISS.COM reservations portal. Compensaid enables travellers to reduce the volumes of carbon dioxide (CO2) generated by their air travel by paying for the use of sustainable alternative fuel. They can also still offset their (remaining) emissions by contributing to the Swiss-based myclimate foundation, which uses the money it receives to finance high-quality climate protection projects.
“The use of synthetic fuels is one of the most promising options for making air travel climate-neutral in the longer term,” says SWISS Chief Executive Officer Thomas Klühr. “And I am delighted that, in Compensaid, we are providing the first global online platform of its kind to further support and promote the use of such alternative fuel in the air transport sector.”
The industrywide use of sustainable aviation fuel (SAF) has been thwarted to date by the volumes available and the high costs of producing them. Only a few refineries in the world are currently capable of manufacturing SAF to the certified standards required and in sufficient quantities.
Compensaid works closely with myclimate
Compensaid offers two options for minimizing the environmental impact of an individual’s air travel. First, the customer can opt for SAF to be used instead of fossil fuel. The platform will calculate the difference in price between the SAF and the fossil fuel required for their air journey. The customer will then pay this amount; and within the following six months, the Lufthansa Group’s Fuel Management unit will feed the equivalent volume of SAF into the Group’s flight operations.
As a second option, customers can continue to offset the carbon emissions generated by their air travel via the Swiss-based myclimate foundation, which has been a partner of the Lufthansa Group since 2007 and which promotes effective climate protection by supporting high-quality environmental projects in developing countries and emerging economies.
Compensaid thus gives the customer a choice of approaches for minimizing the environmental impact of their air travel in carbon emissions terms. The options can also be combined. “Reducing global CO2 emissions requires action at various levels,” says myclimate media spokesman Kai Landwehr. “So we welcome the fact that, in addition to voluntarily offsetting their carbon emissions, SWISS customers can now also help to reduce such emissions right at the source.”
SWISS working steadily to reduce its carbon emissions
SWISS has been committed to sustainability and responsibility in its corporate policies for many years now, and has long put a strong emphasis on limiting the environmental impact of its business activities to an unavoidable minimum. As well as conducting extensive fleet renewals and making use of the latest technological advances, continuously improving fuel efficiency and optimizing procedures in the air and on the ground are particular priorities here. “We are investing more than CHF 8 billion over a ten-year period in acquiring advanced and fuel-efficient aircraft, and operate one of Europe’s youngest – and thus most efficient – aircraft fleets,” Thomas Klühr continues. “In fact, we have reduced our CO2 emissions per 100 passenger-kilometres by almost 30 per cent over the last 15 years.” SWISS also has a number of dedicated teams working to bring even more efficiency to its daily flight operations.
SWISS is also a strong supporter of CORSIA, the climate protection programme developed by the UN’s International Civil Aviation Organization (ICAO). CORSIA requires the international air transport sector to fully offset any further increases in its CO2 emissions from 2020 onwards, meaning that the industry will be carbon-neutral in its growth from this date on. CORSIA was approved unanimously by ICAO’s 192 members back in 2016, and is considered a historic achievement. Once it is established, the programme will provide a basis for further effective and globally-orchestrated environmental actions within the air transport industry. In addition, air transport from Switzerland is to be newly included in the European Union Emissions Trading System, whose annual carbon credits will also be gradually reduced from 2021 onwards.
For further information on Compensaid, visit swiss.compensaid.com and https://www.swiss.com/corporate/en/company/responsibility/environmental-responsibility.