SWISS wins in two categories in the 2018 World Travel Awards 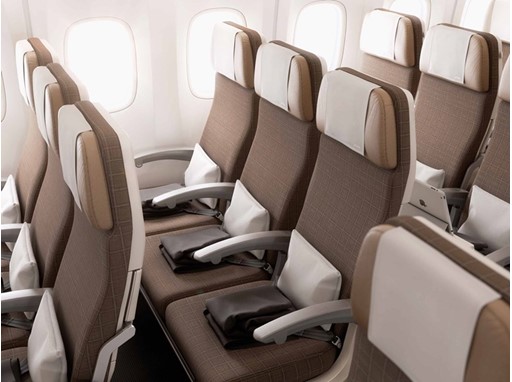 SWISS has been distinguished for both its Economy Class and its First Class service products in the 2018 World Travel Awards. The prestigious annual honours are based on a worldwide poll of specialists in the travel and tourism field.
Swiss International Air Lines (SWISS) has taken first place in two categories in the 2018 World Travel Awards. The annual global poll of travel and tourism specialists names SWISS both ‘Europe's Leading Airline Economy Class’ and ‘Europe's Leading Airline First Class’. “We are thrilled with these awards, and with the confirmation they give us that people appreciate our continuous investments in enhancing their air travel experience in every seating class,” says SWISS Chief Commercial Officer Markus Binkert. “As The Airline of Switzerland, we attach huge importance to offering all our customers a quality air travel product that is rooted in our traditional Swiss hospitality.”
New aircraft, greater comfort
SWISS’s advanced aircraft fleet was a key factor in these latest industry awards. It was back in early 2016 that the company embarked on a programme to renew its long-haul fleet with the acquisition of twelve Boeing 777-300ERs. With its new seats, its sophisticated cabin configuration and its inflight connectivity, the new SWISS flagship sets new benchmarks of air travel comfort in all three classes. And SWISS’s short-haul customers have also been benefiting since 2016 from an advanced new aircraft in the shape of the Bombardier C Series. Designed and developed from scratch, this state-of-the art twinjet features a bright cabin with large windows, an innovative seat offering optimum comfort and spacious carry-on baggage bins. SWISS will have taken delivery of 30 such aircraft in a mix of its CS100 and CS300 versions by early 2019, giving it one of Europe’s youngest aircraft fleets.
Modernized lounges and expanded Zurich services
SWISS has steadily further expanded and modernized its products and services at Zurich Airport, too, over the past two years. Having opened a new First Class Lounge and a Business and Senator Lounge in the long-haul Dock E in early 2016, the airline also opened its new SWISS First Lounge A this spring. And its ground product for First Class travellers will be further enhanced from 3 July with the introduction of a new service which collects the inbound customer from the aircraft door and chauffeurs them to the airport’s passport control and any security checkpoint required.
SWISS’s ongoing ground services enhancements are benefiting Economy Class travellers, too. Between now and the end of this year the company will be comprehensively modernizing its check-in zone in Zurich’s Terminal 1. By adding new design elements here, and by adopting a new desk concept for groups, families and premium travellers and creating new waiting areas, The Airline of Switzerland aims to further raise the airport comfort and convenience for its customers in all travel classes, while simultaneously offering them a consistent SWISS experience.