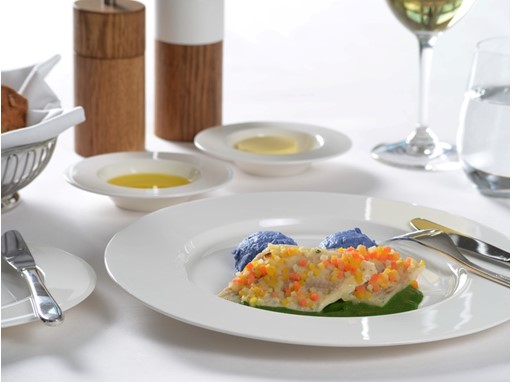 SWISS will be serving light seasonal dishes from Switzerland’s Canton Ticino this summer to its First and Business Class customers on outbound long-haul flights. The creations by Lorenzo Albrici, the owner and chef de cuisine of the Ristorante Locanda Orico in Bellinzona, mark the latest chapter in the airline’s award-winning “SWISS Taste of Switzerland” inflight culinary programme. Regional wines and cheese specialities complete the new offer.
First and Business Class guests on Swiss International Air Lines (SWISS) intercontinental flights from Switzerland can sample all the culinary variety of Switzerland’s Canton Ticino this summer. From today (6 June) to the beginning of September, Lorenzo Albrici, a native of Bellinzona and the owner and chef de cuisine of the town’s Locanda Orico restaurant, will be presenting inflight creations that reflect his love of seasonal cuisine with Italian and French influences. Selected items from this SWISS inflight menu will also feature in the Locanda Orico’s tasting menu over the summer months.
Lorenzo Albrici is representing his home canton in the latest chapter of SWISS’s “SWISS Taste of Switzerland” programme, with which The Airline of Switzerland has been showcasing the culinary variety of its home country’s cantons and regions to its guests on board since 2002. This is the sixth time that Canton Ticino has been featured in the programme.
Valle Maggia pepper and Chocolat Stella in First Class
For SWISS’s First Class guests Lorenzo Albrici has concocted a starter of cream of green pea soup with Valle Maggia pepper and local Büscion cheese, along with main courses that include a Ticino-style trout fillet with vegetable brunoise, stinging nettle cream sauce and blue potato purée. The selection is rounded off with a chocolate cake with Ticinese Chocolat Stella, raspberry sorbet and coulis and caramelized pistachios.
Valle Maggia polenta and Gottardo cheese in Business Class
Business Class guests can enjoy a Ticino-inspired starter of marinated king prawns with cantaloupe melon accompanied by basil and Pedro Ximénez sherry vinaigrette, and a choice of main courses that includes beef tenderloin with wholegrain mustard sauce, Valle Maggia polenta, baby carrot and courgette. And for the Business Class dessert Lorenzo Albrici offers a summery strawberry mousse and compote with almond crumble.
To offer SWISS’s premium guests the full Ticino culinary experience, all these meals are accompanied by regional wines and cheese specialities. SWISS Business travellers can thus enjoy a Gottardo, a Lucendro and a Gorello cheese with Swiss pear bread, while the Business Class wines include a white Merlot from Giubiasco, the Biancovino 2017 and a red Merlot from Biasca, the Biasca Premium 2016. The cheese delights for SWISS First guests further include Alpe Manegorio DOP, Formaggella and Caprino, while the First Class wine selection extends to two well-known Ticino wines, the Bianco Rovere 2016 and the Quattromani 2015.