SWISS takes off with Confiserie Sprüngli 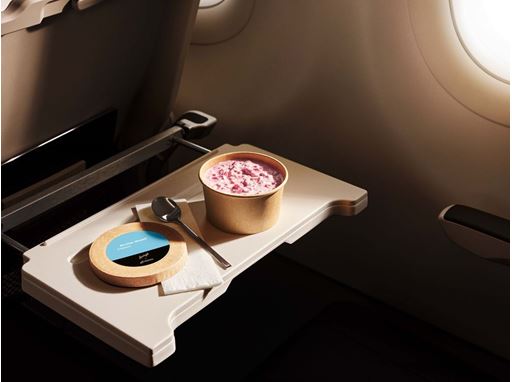 SWISS is extending its ‘SWISS Saveurs’ food and beverage concept for Economy Class travellers which has already proved such a success in Geneva to its short- and medium-haul services from and to Zurich from the end of March. In doing so, SWISS will be working exclusively with Confiserie Sprüngli, the long-established and internationally renowned Swiss family firm, whose recipes will be used for all the fresh items on the SWISS Saveurs menu. In compiling its new range of for-purchase inflight snacks and drinks, SWISS is putting a firm emphasis on offering a wider selection of items, on freshness and quality, on regional accents and on sustainable packagings. The new food concept will also bring other reputed Swiss brands on board along with smaller local suppliers. And SWISS will further be offering its own new mineral water from the Glarus Alps, which will be distributed to all travellers free of charge.

In introducing its SWISS Saveurs inflight culinary concept for short- and medium-haul Economy Class travellers from and to Zurich from 30 March onwards, Swiss International Air Lines (SWISS) is embarking on an exclusive new partnership with Confiserie Sprüngli, the internationally renowned Swiss company which is now in the hands of the sixth generation of its original founding family. Established in 1836, Confiserie Sprüngli has long been a byword for Swiss chocolate tradition and for products of outstanding quality and freshness made with natural ingredients. In this unique collaboration, all the fresh items on the new SWISS Saveurs menu such as muesli, salads, sandwiches and sweet pastries will be prepared using recipes of this Zurich-based traditional Swiss company.

“We are delighted to have teamed up with such an internationally renowned yet locally based partner with such a long tradition and such a focus on culinary excellence for this collaboration, which will enable us to offer a wide range of fresh top-quality snacks to our Economy Class customers, too,” says SWISS Chief Commercial Officer Tamur Goudarzi Pour. “We’ll be breaking new ground here with our packagings as well, where we’ll be using sustainable materials wherever we possibly can.”

The new Sprüngli products will be available on short- and medium-haul services from and to Zurich from 30 March and on services from and to Geneva from 28 April. SWISS Saveurs will be offered on flights of 50 minutes or more duration. The new menu extends to Bircher muesli, a pretzel with air-dried beef, a vegetable brioche and Sprüngli’s famous Luxemburgerli mini-macaroons. The prices per item range from CHF 7.50 for a Bircher muesli or a sandwich to CHF 18.50 for a freshly prepared hot meal (on longer flights). The product range will be updated every three to six months. SWISS’s tried-and-trusted Business Class concept for its short- and medium-haul services remains unchanged.

Sustainability is a further key consideration with the new fresh products. Most SWISS Saveurs items will be packaged in PaperWise material, which is made from agricultural waste using only renewable energy, and is thus entirely carbon-neutral. Those items that cannot yet be offered in PaperWise packaging will be packed in FSC-certificated cardboard or kraft paper. Production of the new fresh items will also be more closely tailored to customer demand, which will help to minimize food waste.

To provide its inflight guests with an even broader range of for-purchase SWISS Saveurs items, SWISS will be supplementing its new exclusive fresh Sprüngli products with further Swiss classics such as Ragusa, Kägi Fret, Zweifel chips and Caotina hot chocolate. And there’ll be smaller Swiss producers to discover, too: the coffee will come from the small Zurich-based miró manufactura de café roastery, which sources all its beans solely from fair-trade suppliers; and the beverages range will include a gin from Turicum of Zurich and WhiteFrontier craft beer from Martigny in Canton Valais.

The snacks and drinks will be priced between CHF 3 and CHF 12. And the full range of SWISS Saveurs items can be viewed on swiss.com. SWISS will continue to offer all its inflight guests its popular SWISS Chocolates, along with a complimentary bottle of water.

Together with SWISS Saveurs, SWISS is also launching a new mineral water together with its water supplier RAMSEIER Suisse AG that is produced exclusively for the airline in Switzerland’s Glarus Alps: ‘SWISS Altitude 1150’, a name inspired by the source spring’s elevation at 1,150 metres above sea level. The new mineral water will be served only on SWISS flights, and will be distributed to all passengers free of charge in a recyclable bottle in an unmistakable SWISS design. In a first step, SWISS Altitude 1150 will be provided on SWISS’s short- and medium-haul services, with the offer then gradually extended throughout the SWISS long-haul network.