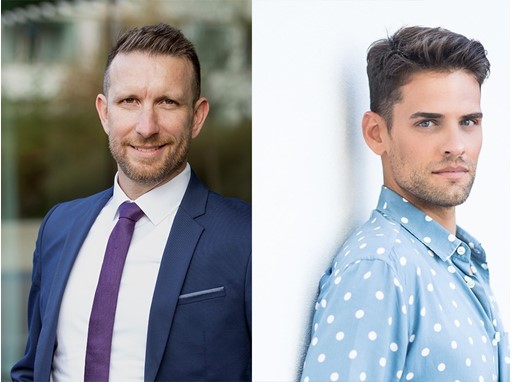 Michael Stief and Marco Lipp have been appointed as media spokesmen for Swiss International Air Lines. They will succeed Stefan Vasic and Florian Flämig.
Michael Stief and Marco Lipp have been appointed as media spokesmen for Swiss International Air Lines (SWISS). They succeed Stefan Vasic, who will be taking charge of SWISS’s Sponsoring & Events, Social Media and Tourism Partners next month after five years in his media spokesman capacity, and Florian Flämig, who will be leaving SWISS at the end of March after a little over seven years to take on a new challenge outside the company.
Michael Stief, who is 43 and a Swiss national, is currently self-employed as a visual storyteller. Prior to this he served in business development at Xovis AG. He also spent five years, from 2011 to 2016, with Zurich Airport’s operator Flughafen Zürich AG, latterly as senior media spokesman. Stief can also draw on many years of experience as a cabin crew member with both Swissair and SWISS. He holds a Bachelor of Arts degree in Journalism and Corporate Communications from the ZHAW Zurich University of Applied Sciences. Michael Stief succeeds Stefan Vasic, and will assume his new SWISS duties on 1 February.
Marco Lipp, who is 34 and a Swiss national, comes to SWISS from the Swiss Re Group, one of the world’s leading reinsurers, where he has spent the past seven years in the media relations, internal & leadership communications and social media fields. He also served as a SWISS cabin crew member from 2008 to 2012. He holds a Bachelor of Science degree in Business Communications from the HWZ University of Applied Sciences in Business Administration Zurich. Marco Lipp will take up his new duties at the beginning of April, succeeding Florian Flämig.
“I am delighted that, in Michael Stief and Marco Lipp, we have secured the services of two new colleagues who not only bring extensive communications experience but also have kerosene in their blood,” says SWISS Head of Corporate Communications Daniel Bärlocher of the new appointees. “I would like to thank Stefan Vasic and Florian Flämig for all their work and their great commitment to SWISS. With their professionalism and their efficiency, they have made a substantial contribution to the high quality of our Media Relations unit. And I wish them both every further success and satisfaction in their professional and their personal futures.”
Meike Fuhlrott and Sonja Ptassek remain further members of the SWISS Media Relations team, which is headed by Karin Müller.