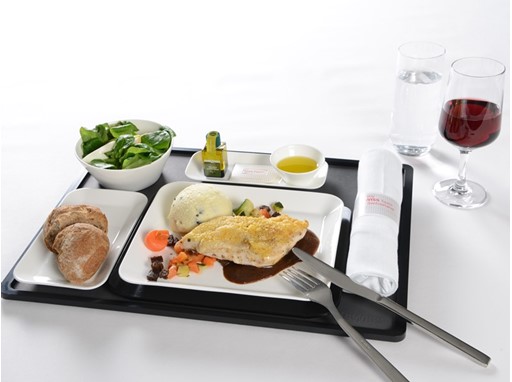 SWISS will be serving its First and Business Class guests on long-haul services from Switzerland a selection of the most popular meals from its now-15-year-old “SWISS Taste of Switzerland” inflight culinary programme for the next three months. The airline has been offering outbound premium travellers exclusive quarterly creations by local top chefs from all its home country’s cantons since the programme was launched in 2002.
From today to early June, Swiss International Air Lines (SWISS) will be celebrating the 15th anniversary of its “SWISS Taste of Switzerland” inflight culinary concept, which is a key ambassador of Swiss cuisine to international customers aloft. Under the programme, which was launched in December 2002, SWISS takes its First and Business Class guests on long-haul services from Switzerland on a culinary adventure around the various regions of its home country. Every three months a top Swiss chef will present their home-base canton by creating a selection of top-quality meals for SWISS’s inflight guests. The creations are accompanied by wines and cheese specialities from the canton concerned. To date, “SWISS Taste of Switzerland” has welcomed 64 chefs from all 26 Swiss cantons aboard. And to mark the programme’s 15th anniversary, SWISS will be serving some of its most popular meals for the next three months.
Top First Class cuisine
SWISS First guests can choose from starters that include crab meat with Ponzu sauce and seaweed salad with sesame, a creation of starred chef Sven Wassmer of the Silver Restaurant in Vals (Canton Grisons) that was featured on board in winter 2016. The Thai red curry soup with fried duck wonton is from Marcus G. Lindner of The Alpina Gstaad (Canton Bern), and was originally served in winter 2015. The main courses include a veal steak with Soubise sauce and a potato and yak sausage frittata with alpine cheese, concocted by Mansour Memarian for winter 2014 (Canton Uri), and black cod with citrus vinaigrette, Cima di Rapa coulis, red peppers and saffron fennel, the summer 2015 creation of Zurich chef Antonio Colaianni. The First Class menu is rounded off with an apricot and thyme slice with pistachio crumble and quark sorbet by Dominique Gauthier of the Hotel Beau-Rivage (Canton Geneva) of summer 2014. The meals are accompanied by Swiss white and red wines that include a 2016 Clos du Boux Grand Cru Epesses from Canton Vaud and a 2015 Cayas Réserve from Canton Valais.
Varied Business Class creations
Guests in Business Class on SWISS’s outbound long-haul flights can enjoy a starter of Balik salmon tartare with horseradish cream, beetroot and goat’s cheese (created by Andreas Schwab of Canton Ticino in spring 2015). The choice of main courses includes an Alpstein chicken with PX sauce, truffled polenta and carrot-and-courgette medley (by Sebastian Zier and Moses Ceylan of Einstein in Canton St. Gallen in autumn 2016) and an asparagus fricassée with mascarpone sauce and Rosemary roast potatoes that stems from Hiltl in Zurich, the world’s first vegetarian restaurant (spring 2016). And among the Business Class desserts is a yoghurt and honey mousse with strawberry sponge and Bircher muesli popcorn (the work of Andreas Appenzeller of the Hotel frutt Lodge & Spa in Canton Obwalden, and originally featured in summer 2017).
The SWISS Business meals are also accompanied by Swiss white and red wines that include a 2017 Cuvée Blanche from Canton St. Gallen and a 2016 Davaz Fläsch Pinot Noir from Canton Grisons. In view of its continued popularity, SWISS will be maintaining its “SWISS Taste of Switzerland” inflight culinary programme in the coming years, too.