SWISS brings the cuisine of the Bernese Oberland aboard 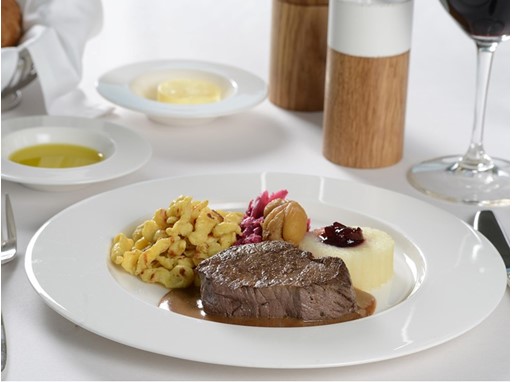 Bern will be the guest canton in SWISS’s galleys from 5 December to the beginning of next March. The latest chapter in the award-winning “SWISS Taste of Switzerland” inflight food concept sees Robert Speth, chef de cuisine at the renowned Chesery restaurant in Gstaad, offering SWISS’s premium long-haul guests his exclusive culinary creations.

Swiss International Air Lines (SWISS) will be bringing the culinary variety of the Bernese Oberland aboard its flights this winter, from 5 December to early March. SWISS First and SWISS Business travellers on long-haul services from Switzerland will enjoy selected meal creations by Robert Speth, the reputed chef de cuisine of the Chesery restaurant in Gstaad, an institution of the Le Grand Bellevue five-star hotel that has helped cement the local Saanenland’s strong appeal as a culinary destination.

Top-notch simplicity is the hallmark of Robert Speth’s kitchen, which forgoes unnecessary decoration and complex combinations in favour of genuine flavours coaxed from outstanding ingredients. It’s a philosophy that has already earned him 18 GaultMillau points. And he now brings his culinary excellence to SWISS, for the latest chapter of its award-winning “SWISS Taste of Switzerland” programme, which has been showcasing top regional cuisine from all over the country since 2002.

Venison, spätzle and chestnuts in SWISS First
SWISS First customers can look forward to a starter of Bernese cheese rolls filled with herb quark, and a main course of saddle of venison with spätzle and glazed chestnuts or halibut fillet with white wine sauce, served with a potato and leek ragout. And for dessert Robert Speth has concocted atarte au vin cuit with plum compote.
Braised beef or char in SWISS Business
Business Class travellers can opt for a starter of yoghurt and sour cream terrine with prawns and a cucumber carpaccio, while the main course choices include a char fillet with calamansi beurre blanc served with mashed potato and braised beef brisket with parsnip purée. Speth’s SWISS Business creations are rounded off with a nougat slice with toasted hazelnuts and marinated oranges.
Regional cheeses and wines
The Bernese Oberland brings highlights aboard on the cheese front, too. In addition to selected Bernese Alpkäse varieties, SWISS First guests will be offered such delights as a Tomme Rougemont to which Robert Speth has added a truffle filling; and SWISS Business customers will be able to choose from Bernese Alpkäse, Hobelkäse and a Weichkäse from the Gerzensee.
All the regional wines for this latest SWISS Taste of Switzerland tranche have been sourced from the Lake Biel region. SWISS First customers will be offered a Chasselas white from the Steiner winery in Schernelz-Village and a Maganoir Auberson, a red assemblage by Auberson & Fils of La Neuveville. SWISS Business travellers can enjoy two wines from the City of Bern’s La Neuveville estate: a Chasselas (Schafiser Bielersee AOC Chasselas) white and a Pinot Noir (Schafiser Bielersee AOC Pinot Noir) red.