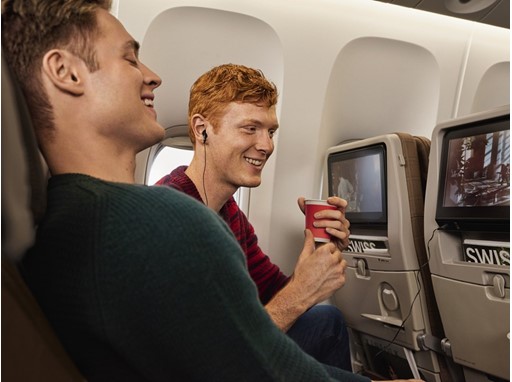 SWISS is now showing selected classic Swiss movies as part of its regular inflight entertainment. The additional selection, which was introduced on 1 February in a partnership with online Swiss film catalogue filmo, currently offers six culturally and historically outstanding Swiss feature and documentary films.
Swiss International Air Lines (SWISS) further expanded its inflight film programme at the beginning of this month. In collaboration with the filmo online Swiss film catalogue, the airline now additionally offers six selected works that are of particular significance in the history of Swiss film. By means of the new partnership, SWISS aims to promote awareness of and familiarity with Switzerland’s film heritage, while also enlarging its existing range of Swiss-themed inflight entertainment under the “Made in Switzerland” banner.
Filmo is an initiative of the CH.Film association, and is dedicated to preserving Switzerland’s film heritage by digitalizing it. The films it subjects to such digital preservation are selected by independent specialists on the basis of various criteria: some are by Swiss directors or producers, while others depict certain events or periods in Swiss history or regions of the country. What they all have in common is their outstanding quality, be it in cultural, historical and/or aesthetic terms.
To commence its new filmo partnership, SWISS is offering the following six films in its inflight entertainment programme in the “Made in Switzerland” category. Under current plans, the films will be available for a six-month period, after which they will be succeeded by a new partnership selection:
San Gottardo – CH 1977; Villi Hermann – documentary film, 90 minutes
The two key building phases in the history of the St. Gotthard Pass prompted major migrations and changed the horizons and perspectives of both the workers and the local populations.
Les petits fugues – CH 1979; Yves Yersin – feature film, 145 minutes
Pipe has been working on the same farm for years. When he receives his first old-age pension, he buys himself a moped. The farmer’s family are shocked, but Pipe is determined to enjoy his new-found freedom to the full.
Reise der Hoffnung – CH, I, DE 1990; Xavier Koller – feature film, 110 minutes
It’s 1988 when a Turkish couple and their son embark on a “journey of hope” that should take them out of their poverty to the riches of Switzerland. Their illegal immigration comes to a tragic end.
War Photographer – CH 2001; Christian Frei – documentary film, 96 minutes
Working in a war zone surrounded by death, suffering, violence and chaos, photographer James Nachtwey searches for a picture that can bring all the misery tellingly home.
Das Fräulein – CH 2006; Andrea Štaka – feature film, 81 minutes
Three strong-willed women from different parts of former Yugoslavia meet in Switzerland, and a friendship begins.
Home – F, Be, CH 2008; Ursula Meier – feature film, 95 minutes
Next to a half-finished motorway lives a five-member family in an isolated house with a small garden. When the motorway finally opens, their idyll looks set to vanish.
Further details of the new Swiss films on offer under the filmo collaboration will be found on
swiss-inflightentertainment.com or on filmo.ch.