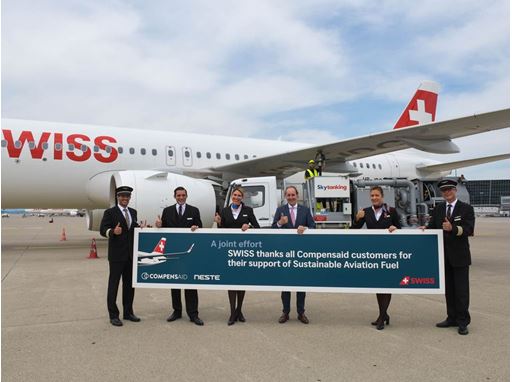 SWISS has established the first-ever end-to-end logistics chain for importing sustainable aviation fuel (SAF) to Switzerland in collaboration with various partners. This makes SWISS the first commercial airline to use SAF in its scheduled flight operations from Switzerland. Thanks to its highly advanced aircraft such as the A32Xneo family, SWISS’s initial SAF delivery is sufficient to fuel more than 175 flights. SWISS customers can pay full regard to environmental care in their air travels by promoting the use of SAF via the Compensaid programme. Subject to further development, including a scaling-up of production, the use of SAF can sustainably reduce carbon emissions.

Swiss International Air Lines (SWISS) has teamed up with Neste, one of the world’s leading sustainable aviation fuel (SAF) providers to establish the first-ever end-to-end logistics chain for importing SAF to Switzerland. This makes SWISS the first commercial airline to use SAF in its scheduled flight operations from Switzerland. Aircraft fuel with a biogenic component has been importable to and usable in Switzerland since 1 July 2021, thanks to new customs provisions.

“We are delighted to have received the first delivery of our own-sourced SAF into Switzerland so soon after these new customs regulations came into force,” says SWISS CEO Dieter Vranckx. “For years now, SWISS and the Lufthansa Group have been lobbying for the import of sustainable aviation fuels, because these will be the key technology for the mid-to-long term future in enabling us to achieve our climate goals for 2030 using present aircraft powerplant technologies. We would like to thank everyone who has been involved in establishing this new process and has worked to make it happen – especially the Swiss customs authorities, Flughafen Zürich AG, Avenergy and Neste.”

SWISS’s first delivery of neat SAF amounts to more than 460 tonnes. With SWISS’s highly advanced aircraft such as the A32Xneo family, this is mathematically sufficient to fuel more than 175 flights. SAF will be fuelled at Zurich Airport via the conventional hydrant system. The Neste SAF blend is Jet A-1 certificated, and can be used just like fossil jet fuel on all aircraft types without any modifications required to the aircraft or its engines.

“This is a milestone for Swiss aviation on the sustainability front,” SWISS CEO Vranckx continues. “We are proud to be the first airline to have laid the foundations for SAF to be used in scheduled flight operations in Switzerland. Because this, combined with our highly advanced aircraft fleet, really enables responsible air travel.”

Neste’s SAF is made from sustainably-sourced renewable waste and residue raw materials. In its neat form, and viewed over its full life cycle, its use can reduce greenhouse gas emissions by up to 80 per cent compared to fossil fuels. Its production was certificated for its sustainability credentials by the independent Roundtable on Sustainable Biomaterials (RSB) in April of this year. Neste can draw on many years of experience in producing biofuels, and also on a long-standing and fruitful collaboration with the Lufthansa Group.

“We are very pleased to welcome SWISS to the ever-growing ranks of major airlines that are using SAF,” says Jonathan Wood, Neste’s Vice President Europe, Renewable Aviation. “This first-ever delivery of SAF to Switzerland for commercial airline use is a major milestone for us at Neste, too.”

This first SAF import is thanks not least to the environmental commitment of SWISS’s customers via the Compensaid (swiss.compensaid.com) platform. Through a partnership that was established in 2019, SWISS offers its customers the option, when booking their flight, of buying sustainable aviation fuel via Compensaid to reduce the carbon emissions caused by their air travel.

“A next step,” says SWISS CEO Vranckx, “must be to scale up the production of SAF, which is still very expensive, to bring its price down closer to those of fossil fuels. I would like to take this opportunity to thank all our customers who have opted to buy SAF via Compensaid and, in doing so, have made their own valuable contribution to reducing carbon emissions.”

SAF has a vital role to play in decarbonizing air transport. In view of this, SWISS considers it crucial that the commercialization and market introduction of SAF should be driven and promoted in an internationally coordinated way. With its first import of SAF to Switzerland and its associated actions to establish full SAF logistics, SWISS is underlining its own intention to support SAF’s market introduction.

“We have set ourselves ambitious climate goals,” SWISS CEO Vranckx confirms. “We aim to halve our net carbon dioxide emissions from their 2019 level by 2030, and to have net-zero CO2 emissions by 2050. By investing billions in a state-of-the-art aircraft fleet, partnering to promote SAF and making further product and process refinements, we are playing our own SWISS part in giving travel a more sustainable future.”

SWISS has been working together with the Lufthansa Group for several years now to promote research into and the trialling and adoption of sustainable aviation fuels. The Lufthansa Group was doing pioneering work here as early as 2011, when it conducted the world’s first long-term trials of biofuels in Lufthansa’s scheduled flight operations in cooperation with Neste.