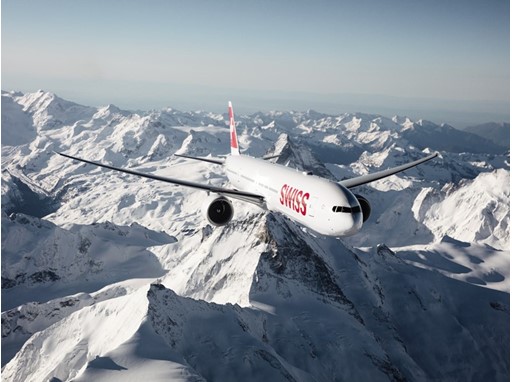 SWISS orders two further Boeing 777-300ERs to take its long-haul fleet to a total of 31 aircraft. The aircraft are expected to go into operation in early 2020 and will be used to extend the route network. Through this investment of over half a billion US dollars, SWISS will create over 300 additional jobs – further proof of its commitment to Switzerland as a business location.
Swiss International Air Lines (SWISS) has ordered two further 777-300ERs from Boeing, the American aircraft manufacturer. The additional machines will be used to extend the route network and are expected to go into operation in early 2020. The Swiss airline already operates ten Boeing 777-300ERs, a technically mature aircraft which, in service with SWISS, is appreciated by customers and flying personnel alike for its extraordinary reliability. It also provides sufficient range to cover the longest flights from Switzerland non-stop. A decision will be made on the routes to be served by the two new aircraft within the next year.
Continuing investment in Switzerland as a business location
Representing a total investment volume of over USD 600 million, the acquisition of the two
Boeing 777-300ERs is further proof of the Lufthansa Group’s commitment to SWISS, and hence to Switzerland as a business location. The two additional aircraft will facilitate an expansion of the route network, thereby further reinforcing Switzerland’s global connections. The entry into service of the two Boeing 777-300ERs will also create over 300 additional cabin, cockpit and technic-related jobs.
"I'm delighted that our sustained profitability allows us to make a further investment in our fleet for continuing organic growth. That should not, however, blind us to the fact that Zurich Airport will reach its capacity limit in the next few years and will therefore be unable to accommodate forecast growth", says SWISS CEO Thomas Klühr.
Following the commissioning of the two new aircraft, the SWISS long-haul fleet will comprise a total of 12 Boeing 777-300ERs, five Airbus A340-300s and 14 Airbus A330-300s.