New Zurich Business and Senator Lounges to open on 2 July 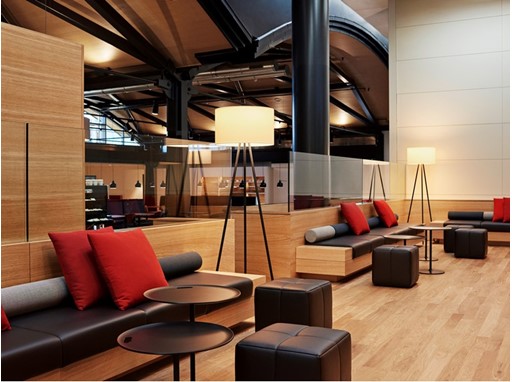 SWISS will be opening its redesigned Lounge Center A at Zurich Airport on Monday 2 July. The new centre, which is mainly aimed at short-haul travellers, extends to a Business and a Senator Lounge and boasts a modern zonal concept with a range of privacy options, market hall-style food areas, elegant Swiss-made furniture and clear SWISS design lines. Travellers in all classes will also soon enjoy the airport’s remodelled Terminal 1, including an upgraded SWISS check-in zone with new design elements, a new desk concept and new waiting areas.

Swiss International Air Lines (SWISS) will open the doors of its modernized Business and Senator Lounges within Zurich Airport’s Lounge Center A on Monday 2 July. The new-look lounges have been particularly aligned to the needs of short-haul SWISS premium travellers, with facilities that include separate lounge entrances and digital access control.

A modern zonal concept and top Swiss design
In addition to the traditional reception desk, each of the separate entrances to the new Business and Senator Lounges will also feature two automated entry gates permitting swift boarding-pass access to the lounge concerned. Inside, the new-look facilities adopt the same modern zonal concept which has already proved its worth in SWISS’s existing Dock E lounges by enabling guests to select the level of privacy they seek to meet their specific needs, from lounge niches, a bar area with views of the Airside Center, workstations and even individual offices to a relaxation room complete with inviting loungers.
Smokers are catered for in both lounges, too, with new outside areas. And for travellers wishing to freshen up before (or after) their flight, the new facilities offer five showers that are accessible from either lounge. The lounges’ food areas, meanwhile, have been devised along market-hall lines, and each include both a large bistro section and a front cooking zone.
The design and interior of both the new lounges also follow the example of the existing Dock E complex: with their bright oiled-Swiss-oak parquet floors and their elegant furniture from such top Swiss designers as Vitra and deSede, the new lounges offer both a consistent SWISS-style look and a living-room ambience in which every SWISS premium traveller should feel genuinely at home.
A Swiss “Alpenstübli” and new SWISS chocolates
A further highlight of Zurich’s new Lounge Center A will undoubtedly be the new “SWISS Alpenstübli” within the Business Lounge, in which The Airline of Switzerland will present its home country in all its regional variety on a series of large screens. The room is also decked out with allergy-friendly straw wallpaper, and uses a 3D model to give guests a unique visual impression of SWISS’s national home.
From the end of July onwards, visitors to the new Lounge Center A will also be offered a mini version of the popular SWISS chocolates, which have so far only been served aboard SWISS flights. The new smaller version will only be available in these lounge facilities.
The new Lounge Center A will be open daily from 05:30 to 22:30. The SWISS Business Lounge will be available to all Business Class travellers of SWISS and the Lufthansa Group, Miles & More Frequent Travellers and Business Class travellers on further Star Alliance airlines. The Senator Lounge will be exclusively available to Miles & More Senators, Star Alliance Gold Members and First Class travellers on Star Alliance member airlines.
Zurich check-in redesign
SWISS’s ongoing ground services enhancements are benefiting Economy Class travellers, too. Between now and the end of this year SWISS will be comprehensively modernizing its check-in zone in Zurich’s Terminal 1. By adding new design elements here, and by adopting a new desk concept for groups, families and premium travellers and creating new waiting areas, The Airline of Switzerland aims to further raise the airport comfort and convenience for its customers in all classes of travel, while simultaneously offering them a consistent SWISS travel experience.