SWISS brightens the skies at the Fête des Vignerons 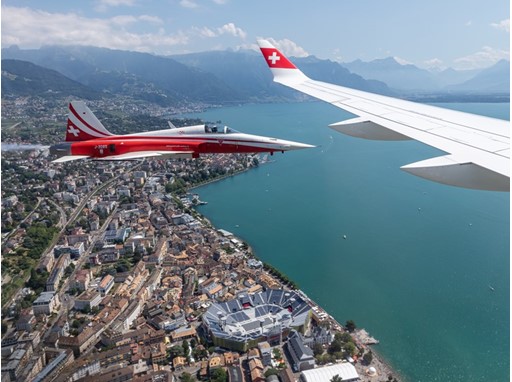 1 August 2019, 12:00 – SWISS made a spectacular sight at the 2019 Fête des Vignerons, in its capacity as the event’s main partner. The SWISS CS300 aircraft which has been specially liveried for the occasion provided an air show over the Vevey festival site together with the Patrouille Suisse, the Swiss Air Force’s air display team, just before the official address in the town’s Place du Marché by Ueli Maurer, Switzerland’s President, to mark the Swiss National Day.
The 45-minute air show delighted the public below. The SWISS CS300 in its specially-commissioned Fête des Vignerons livery conducted a low flypast over Lake Geneva before teaming up with the Patrouille Suisse for a joint display. The F-5E Tigers of the Patrouille Suisse then performed their own aerobatic routine before being joined by the SWISS “Fête des Vignerons” aircraft once again for a final ‘bouquet’.
Photos : https://www.picdrop.de/guler/TqpCxFD8A9
Video: https://we.tl/t-mRIux0DwzW