SWISS reports earnings decline for the first quarter of 2019 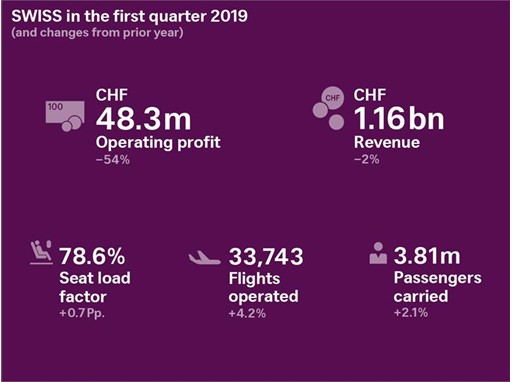 SWISS has reported a substantial decline in its first-quarter earnings for 2019. Adjusted earnings before interest and taxes (Adjusted EBIT) for the period amounted to CHF 48.3 million, 54 per cent down on the same period last year (Q1 2018: CHF 104.1 million1)). Revenues for the period also declined: the CHF 1.16 billion total first-quarter revenues were two per cent below their prior-year level (Q1 2018: CHF 1.18 billion). Sizeable industrywide capacity growth in Europe reduced unit revenues on short- and medium-haul routes from the high levels seen in the first three months of 2018. First-quarter earnings were further depressed by higher fuel and maintenance costs and through declines in the cargo business.
Swiss International Air Lines (SWISS) reports a substantial decline in its earnings for the first quarter of 2019. Adjusted earnings before interest and taxes (Adjusted EBIT) was down 54 per cent at CHF 48.3 million (Q1 2018: CHF 104.1 million1)). Total revenues for the period amounted to CHF 1.16 billion, a two-per-cent decline (Q1 2018: CHF 1.18 billion).
Higher fuel prices depressed first-quarter earnings far more substantially than they had the previous year, while industrywide overcapacities in Europe put sizeable pressure on fares. Having been favourably impacted by the demise of Air Berlin and the ensuing removal of market capacity, the first-quarter results for the prior-year period also served as a high benchmark, against which unit revenues for 2019 suffered a year-on-year decline. The 2019 first-quarter period further brought an increase in maintenance costs, as a result of the large number of the more extensive periodic C Checks which had to be performed. And last but not least, the first signs were seen of declining market trends in the cargo business, especially on routes between Europe and Asia.
While SWISS’s first-quarter earnings for 2019 show a substantial decline from their 2018 level, they are still above the average of the past few years. SWISS also transported around two per cent more passengers in the first three months of 2019 than it had in the prior-year period.
Michael Niggemann, SWISS’s Chief Financial Officer says: “In response to the high capacities in Europe, we have reduced our own capacity growth, and are seeing encouraging booking levels for the quarter ahead. The continuing strong demand on our long-haul routes is making a major contribution here. We remain confident that we will still achieve our target of a double-digit Adjusted EBIT margin for 2019 as a whole.”
SWISS will continue to invest in its premium product in 2019, in the air and on the ground. A new-style lounge will be opened at Zurich Airport this summer; and the modernized check-in concourse in the airport’s Terminal 1 came into operation in January, offering a new check-in desk concept, waiting zones and flight information displays all in the SWISS design to further enhance the travel experience for departing SWISS passengers in all seating classes. Two of the airline’s five Airbus A340-300s have also had their interior completely refurbished, and all five A340s will boast the new cabins by this autumn. The modernized interior offers a totally new cabin in all three classes and a new inflight entertainment system that includes internet connectivity, making this facility available throughout the SWISS long-haul fleet.
Stable flight operations a high priority
As well as further investing in its product and service offer, SWISS will be making the punctuality of its flight operations a high priority during the coming summer’s peak travel months. To this end, SWISS has taken a number of actions and made available a mid-double-digit million-franc investment amount. SWISS CEO Thomas Klühr explains: “Our guests are entitled to expect us, as a premium airline, to provide not just a quality travel experience but punctual operations as well. This summer too, though, will be a major operating challenge, given the shortages of European airspace capacity. Our company will be investing a double-digit million-franc amount this year in improving this situation – by providing additional reserve aircraft, for instance, and by increasing the numbers of our operational personnel.”