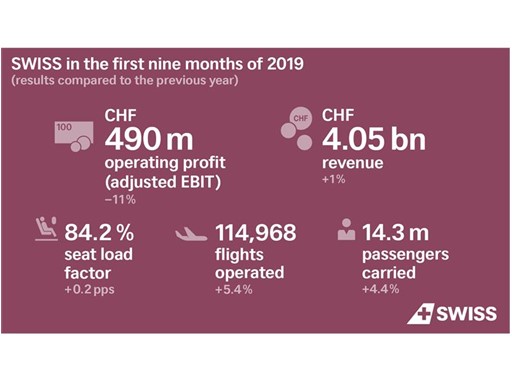 SWISS achieved adjusted earnings before interest and taxes of CHF 490 million for the first nine months of 2019, an 11-per-cent decline from the same period in its record 2018. Total revenues for the period amounted to CHF 4.05 billion, 1 per cent above their prior-year level. Higher fuel and maintenance costs were key contributors to the lower earnings result, which was further reduced by a decline in demand for cargo services and continuing pressure on yields in the passenger segment. Adjusted EBIT for the third-quarter period amounted to CHF 244 million, which was 8 per cent above its prior-year level. Total third-quarter revenues were up 2 per cent at CHF 1.47 billion. The improved third-quarter earnings are largely attributable to higher passenger revenues and to various non-recurring items. SWISS continues to aim for a double-digit Adjusted EBIT margin for 2019 as a whole.
Swiss International Air Lines (SWISS) achieved adjusted earnings before interest and taxes (Adjusted EBIT) of CHF 490 million for the first nine months of 2019, an 11-per-cent decline on the CHF 549 million1) of the same period last year. Nine-month revenues for 2019 totalled CHF 4.05 billion, a 1-per-cent increase on the CHF 4.02 billion of the prior-year period. Fuel costs were particularly substantially higher for the period than they were in 2018, which proved a record year in earnings terms. This year’s nine-month earnings were further reduced by the costs incurred through the need to conduct the first of the periodic “C Check” maintenance visits for the newer members of the aircraft fleet. Weaker demand for cargo services and the continuing deterioration in yields on the passenger front, especially within Europe, also had their adverse impact on the period’s earnings results.
Third quarter: higher passenger revenues and favourable one-off items
For the third-quarter period, which is traditionally the strongest in revenue terms, SWISS improved its Adjusted EBIT to CHF 244 million, an 8-per-cent increase on the CHF 227 million1) of the same period last year. Total third-quarter revenues were also up 2 per cent at CHF 1.47 billion, compared to CHF 1.44 billion for the third quarter of 2018. In addition to the higher passenger revenues, third-quarter earnings were boosted by multiple non-recurring items, including the deferral of the project costs for the two remaining aircraft following the revision of the timetable for the Airbus A340 cabin refurbishment programme.
Target for 2019 confirmed
“We are very pleased with our strong third-quarter earnings result,” says SWISS CFO Michael Niggemann. “In addition to our higher passenger revenues, we benefited here from the tailwind that was provided by various one-off items. We still aim to achieve a double-digit Adjusted EBIT margin for 2019 as a whole,” he continues. “But we remain well aware that this is an ambitious objective.”
Further investments in an advanced aircraft fleet
SWISS, as a premium airline, will continue to attach great importance to offering its customers a top-class air travel experience. To these ends, SWISS will continue to systematically invest in operating an advanced and fit-for-the-future aircraft fleet. The company will launch a comprehensive refurbishment programme for its Airbus A330s in 2022 to equip 14 of these long-haul aircraft with a state-of-the-art new cabin. The work will also see the provision of a new Premium Economy Class in addition to the existing First, Business and Economy Class cabins.
Further fleet developments are planned for the imminent future. The two additional new Boeing 777-300ERs which were ordered in May 2018 will enter SWISS service in the first quarter of 2020. And early next year will also see the arrival of the first aircraft of the new Airbus A320neo family. A total of seventeen A320neos and eight A321neos are scheduled for delivery between 2020 and the end of 2024. The Boeing 777-300ER fleet will also have the new Premium Economy Class added to its Economy, Business and First classes from spring 2021.
1) SWISS adopted new accounting principles at the end of 2018 in compliance with those of the Lufthansa Group. An Adjusted EBIT of CHF 234 million for the third quarter and of CHF 564 million for the first nine months of 2018 were previously reported in October 2018.